To share your memory on the wall of Elsbeth Helling, sign in using one of the following options:

Print
Elsbeth Helling, 92, of St. Joseph, Michigan, went home to be with her Lord and Savior on Friday, January 3, 2020. She was born June 16, 1927 in Gelsenkirchen-Horst, Germany to Ferdinand and Anna (Schweichel) Lenk.

The family will receiv... Read More
Elsbeth Helling, 92, of St. Joseph, Michigan, went home to be with her Lord and Savior on Friday, January 3, 2020. She was born June 16, 1927 in Gelsenkirchen-Horst, Germany to Ferdinand and Anna (Schweichel) Lenk.

The family will receive guests from 5:00 pm until 7:00 pm, Friday, January 10, 2020 at Starks & Menchinger. A funeral service will be held at 10:30 am, Saturday, January 11, 2020 at Washington Ave. Church of God, 4051 Washington Ave., Saint Joseph, Pastor Andreas Hannich officiating. Burial to follow at Hickory Bluff Cemetery, Stevensville. Arrangements have been entrusted to Starks & Menchinger Chapel, Saint Joseph. Memorial contributions may be given to Liberian Missionaries, Caleb & Monika Sannoh https://newinternational.org/give/campaign/sannoh. Checks can be made payable c/o Washington Ave. Church of God.

Elsbeth married Guenther Helling in Germany on August 20, 1949. As a young married couple with a blond, blue-eyed toddler (Esther) born in 1951, they immigrated to the United States in 1953, had a son (Detlef) in 1954 and were married 45 years. They loved the sandy, sunset coast of Lake Michigan and enjoyed countless dinners with their children on its beaches. Elsbeth’s apprenticeship to become a secretary was interrupted by the events of WWII. She did begin her studies as a secretary, then after the war, worked as a nurse, cook, assembly line worker, circuit board assembly worker, and with her sister Frieda, in her brothers-in-law’s cabinet shop. Elsbeth attended the Washington Ave. Church of God where she was a co-worker in various children’s ministries and later in life, loved preparing for and leading the Senior Sunday school class. She sang soprano in church choirs, trios and quartets. Her faith in Jesus was center and foremost in her life and often asked those she encountered about their faith. Elsbeth loved all kinds of crafts and when she saw a craft, she always needed to understand how it was made. She knit and crocheted countless hats, scarfs, jackets blankets and booties. No Christmas was complete without something hand crafted by Mom.

She is preceded in death by her husband, Guenther Helling; sister Gertrude (the late Herbert) Tatzmann, brother Manfred Lenk; her great grandchild Jeffery Farrell; and her parents.
Read Less

We encourage you to share your most beloved memories of Elsbeth here, so that the family and other loved ones can always see it. You can upload cherished photographs, or share your favorite stories, and can even comment on those shared by others.

Posted Jan 11, 2020 at 12:40am
Detlef,
On behalf of SJHS Class of 1973, I would like to offer our deepest condolences on the passing of your mother. Please know that your classmate's thoughts and prayers are with you and your family.
Comment Share
Share via:
RH

I'm so sorry for your loss. Your mom was a sweet and loving part of our family and she will be greatly missed. Take comfort knowing that she is in heaven walking again with loved ones and angels. My prayers are with you and your families during this difficult time. 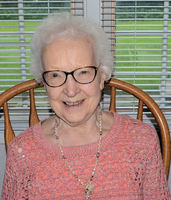