To share your memory on the wall of Elna Grau, sign in using one of the following options:

Elna was a gracious, thoughtful person, offering kindness and compassion to those she met. She began each day with a positive attitude. She was a talented artist, sharing her God-given ability in drawings, oil paintings, ceramics, china painting, and watercolors. She genuinely enjoyed her retail experiences at Low’s, Levine’s, and Judee’s, in LaPorte.

She is survived by her daughter Susan Case and son-in-law Duane, of Eau Claire, Michigan; daughter Mary Powell and grandson Robert, of Longmont; son David Grau and daughter-in-law Penny, of Tualatin, Oregon; and Jim Grau, of Dallas, Texas; 8 grandchildren and 12 great-grandchildren; her brother Earl and his wife, Joan; sisters-in-law Carolyn Kasischke and Lucille Grau, and cousins, nieces, and nephews. Her husband, Herbert, and brothers Edward and Eldon preceded her to their eternal home-Heaven.

A graveside service for Elna will be held on Saturday, December 28th, at 12:00 p.m. at Riverview Cemetery, St. Joseph, Michigan, with Rev. Michael Roth officiating.. Memorials may be made to Trinity Lutheran School.
Read Less

We encourage you to share your most beloved memories of Elna here, so that the family and other loved ones can always see it. You can upload cherished photographs, or share your favorite stories, and can even comment on those shared by others.

Plant a Tree in Memory of Elna
Plant a tree 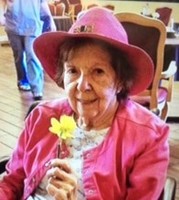