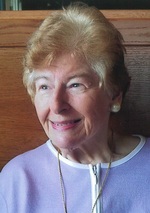 Edith was born in Detroit to John & Sarah (Groening) Rae. The family resided in Fairplain, she graduated from Benton Harbor High School in 1953. Edith was very close with her aunt, Hannah Krezer, and studied the family’s Hebrew faith while attending Temple B’Nai Shalom in Benton Harbor. She married Willard Eugene Bury on February 12, 1955. They had three children; Kathryn, Mark and Timothy. She later married Andrew Myers on December 14, 1976, he passed away in 2008.

Edith worked for Michigan Bell Telephone before marriage, and continued her education at Lake Michigan College and Western Michigan University after her children reached their early teens. Edith achieved a Masters Degree in English, minor in English literature & Speech. She became a high school teacher at Benton Harbor High School, Lakeshore High School and St. Joseph High School. After moving to Kalamazoo area with Andrew Myers, she worked at the Van Buren County Friend of the Court’s office, then retired in the late 1980’s.

Edith loved music! She played the piano & base viol for many years in the Twin City Symphony at many different venues. Edith was preceded by her parents; infant brother, Samuel; first husband, Willard and second husband Andrew.

Arrangements have been entrusted to Starks & Menchinger Chapel, St. Joseph. Those wishing to send a condolence online may do so at www.starks-menchinger.com.