To share your memory on the wall of Doris Gast, sign in using one of the following options:

Her life began on October 8, 1931 in St. Joseph, Michigan. She and her brother, Rich grew up just outside of town, south of St. Joseph and attended the old 2-room Brown Elementary School, that did not yet at that time have modern conveniences such as, plumbing. Her family later moved "into town" before she began high school and where she was to meet her future husband, Warren. After graduation, both she and Warren enrolled at the University of Michigan, where they were married in 1953. She raised three sons, Warren Jr., Brian and Kevin.

She and Warren enjoyed their retirement in the low country at Hilton Head, South Carolina where she built their home at Moss Creek, on the scenic salt marsh. She loved to share her South Carolina home with family members. Visits from her five grandchildren and 7 great-grand children were the joy of her life. In addition to her home in South Carolina, she enjoyed being able to help a large number of not-for-profits with charitable work. Her last charitable effort is to benefit Spectrum Health Lakeland/Caring Circle (4025 Health Park Lane, Saint Joseph, MI 49085), to whom memorials can be made in lieu of flowers. A private family service will be held. Arrangements have been entrusted to Starks & Menchinger Chapel & Cremation Services, 269-556-9450. Those wishing to leave an online condolence may do so at www.starks-menchinger.com.

The family thanks the employees of Caretel, Caring Circle, and special friend, Stephanie Burch for making the last 2 years of her life comfortable and joyful.

Receive notifications about information and event scheduling for Doris

We encourage you to share your most beloved memories of Doris here, so that the family and other loved ones can always see it. You can upload cherished photographs, or share your favorite stories, and can even comment on those shared by others.

Posted Jun 20, 2020 at 05:48pm
KC and Warren, our sincerest sympathy to you. Your Mom was one of the sweetest ladies. She always had a smile and kind words whenever we saw her. May God bless you and your families. Remember the great reunion you will have someday when you are together again.
Comment Share
Share via:
AP

Posted Jun 16, 2020 at 10:29am
Dear Gast Family - we were so saddened to hear of your Mom's/Oma's passing. We are all better people for having the privilege of knowing Mrs. Gast. May you find peace and comfort in sharing the memories of the times spent together. Our thoughts and prayers are with you always! Amy Porritt-Peirce & Michael Peirce
Comment Share
Share via:
JS

Posted Jun 12, 2020 at 02:09pm
We are so grateful and blessed to have gotten to know Mrs. Gast. We will cherish the time we spent with her
She was the nicest, quirkiest little lady I’d ever met.
She will be missed terribly here in the lowcountry.
Sending lots of prayers to the family.
David, Mary and Sterling Spahr

Posted Jun 12, 2020 at 12:07pm
KC, Julie and family...so sorry to hear of Lou’s passing. She was such a wonderful person to know and her generosity was something to admire. What a legacy she leaves. Sue and I have cherished memories of visiting her at HH . We enjoyed taking her to her church and then eating a fine breakfast with a good bloody merry to boot 😁 Will always remember her love for tomato pie. May your hearts be comforted in this time of loss knowing that she is in the arms of her Heavenly Father.
Comment Share
Share via: 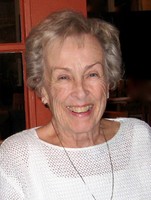