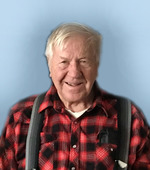 Longtime St. Joseph resident Donald Lee Noah passed away on August 24, 2020 at the age of 89. To his children and grandchildren, he left a legacy of love for family, hard work, red hair, appreciation for the outdoors, and extensive knowledge of fishing and hunting.

Don was born in Grand Rapids, MI on September 28, 1930, the eldest child of Mary and Leo Noah. He graduated from Wayland High School and went on to attend The University of Michigan under an ROTC scholarship. Financing college was challenging and he earned money playing bridge in tournaments across the state with his grandfather as his partner. He was a member of the DKE fraternity and graduated with a Bachelor of Science
degree in Engineering. Don was a life-long University of Michigan fan and boasted that several of his children and grandchildren were U of M alumni also.

While at U of M, Don met the love of his life, Alice Richmond. They celebrated 50 years of marriage before she passed away in 2004. Don served in the Navy as a commissioned officer on the USS Randall. He didn’t see any combat, but did see a lot of ports in the world. After his discharge, Don and Alice moved to her hometown of St. Joseph where they raised four children and several beagles.

Don worked as a plastic engineer for Hughes Plastics and then for Whirlpool Corporation for over 20 years. He was frugal and money savvy and made it his goal to retire at age 57. After retirement, Don and Alice traveled the country with their camping trailer and spent winters in South Padre Island, TX. He always had a fishing pole ready at every stop. After Alice’s passing, Don moved to the family cabin near Baldwin, MI. There he loved watching the birds, catching bluegills, and hosting family gatherings.

Cremation has taken place. A private scattering of ashes will take place at a later date.