To share your memory on the wall of Delio Rabaza, sign in using one of the following options:

Delio was born on March 29, 1938, to Carlos and Julia (Carballosa) Rabaza in Cardenas, Cuba. He immigrated to the United States at the age of thirteen. On August 4,1990 he married Ileana Santos. Delio worked for the railroad system for over 40 years and retired as a foreman. He enjoyed photography, wine, fishing, and cooking, but most of all he loved to spend his time with his family.

Those wishing to leave an online condolence may do so at www.starks-menchinger.com. Arrangements have been entrusted to Starks & Menchinger Chapel & Cremation Services, St. Joseph.
Read Less

Receive notifications about information and event scheduling for Delio

We encourage you to share your most beloved memories of Delio here, so that the family and other loved ones can always see it. You can upload cherished photographs, or share your favorite stories, and can even comment on those shared by others. 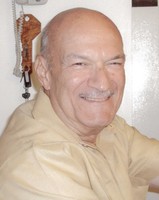