To share your memory on the wall of Daniel Strine, sign in using one of the following options:

Provide comfort for the family of Daniel Strine with a meaningful gesture of sympathy.

A Celebration of Life Service will be announced at a later date, due to the Covid-19 health concerns. Memorial donations in Dan’s name may be made t... Read More
Daniel W. Strine, 73, of St. Joseph, passed away, Monday, March 30, 2020 at his home.

A Celebration of Life Service will be announced at a later date, due to the Covid-19 health concerns. Memorial donations in Dan’s name may be made to First Baptist Church, St. Joseph or St. Joseph Football. Those wishing to sign Dan’s Memory Book online may do so at www.starks-menchinger.com.

Dan was born March 7, 1947 in Benton Harbor to Robert & Dorothy (Jones) Strine. He graduated from St. Joseph High School, Class of 1966. Dan served his country in the US Army during the Vietnam War. On February 28, 1981, he married the former Penny Rea in St. Joseph. Dan was employed by St. Joseph Public Works Department, retiring after thirty years. He was a former member of Oakridge Baptist Church and a current member of First Baptist Church. He served as an AWANA Commander with both Churches. Dan was a member of VFW Post 1137 where he was a past Commander. Dan volunteered with the St. Joseph Football Program and enjoyed his time with the St. Joseph McDonald’s coffee group. He followed Chicago sports-Bears, Black Hawks & White Sox, and the University of Michigan Wolverines. Dan enjoyed trips to the beach and cherished the time spent with his family & many friends.

Receive notifications about information and event scheduling for Daniel

Print
Celebration of Life Services will be announced at a later date. Memorial donations in Dan's name may be made to First Baptist Church of St. Joseph or St. Joseph Football.

Posted May 05, 2020 at 11:57am
Penny and family, I was so sorry to hear of Dan’s passing. I enjoyed working with him at the City. May you find comfort in your memories of Dan.
Comment Share
Share via:
C

Posted Apr 19, 2020 at 08:34am
I was very saddened to hear this! Penny and boys I am so very sorry! I always enjoyed conversations with Dan at St Joe McDonalds, he will be missed!
Comment Share
Share via:
JS

Posted Apr 05, 2020 at 08:55am
RIP Dan! It was great working with you. Peace and prayers to Penny, Keith and Kevin and the entire family. May your beautiful memories of Dan give you peace.
Comment Share
Share via:
DR

Posted Apr 04, 2020 at 06:21pm
Hi Penny,Kevin and Keith, I am keeping you all in my prayers. Dan will always be a great friend and stay in my heart. I always loved his smile. God is taking care of him now. I am so glad he is out of pain. Praying for you all at these especially hard times. I will be thankful to see you all again. God Bless you. David sends his best too. We love you. Debby and David.
Comment Share
Share via: 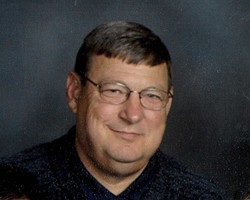