To share your memory on the wall of Daniel McGee, sign in using one of the following options:

Print
Daniel A. McGee, 69, of Benton Harbor, passed away on Saturday, December 28, 2019 after a battle with cancer.

A Celebration of Life Service will take place on Friday, January 3, 2020, at 11 AM at Starks & Menchinger Chapel, 2650 Niles Rd., St. Joseph. Burial will follow at Riverview Cemetery. Friends may visit with the family on Thursday, January 2, from 4 PM until 7 PM at the funeral home. Memorial contributions may be made to Berrien County Cancer Services. Those wishing to leave an online condolence may do so at www.starks-menchinger.com.

Daniel was born on December 2, 1950, in Chesnee, SC, to Harold & Ruth (Mahaffey) McGee. He graduated from Benton Harbor High School in 1969. In 1970, Daniel proudly served our country by enlisting in the United States Navy, where he served aboard the USS Hanson during the Vietnam War. After he returned home, Daniel married the love of his life, Mary “Liz” Trogdon, on May 11, 1974. He worked for Chardon Rubber for 28 years in the maintenance and tool and die departments. Daniel and Liz would spend many afternoons attending car races and experiencing countless motorcycle trips to various locations throughout the United States. He also enjoyed playing golf, scuba diving, water skiing and watching NASCAR. A passion of his was superheroes; specifically, Superman. He was an avid collector of superhero comic books and loved to draw them. So much so, that he painted a scene of ‘Superman on the Moon’ on his motorcycle gas tank. Daniel also liked to cheer on the Detroit Lions & Red Wings, and watching movies on his computer. He was a loving and compassionate man, who always put a smile on everyone’s face. Daniel will truly be missed by all who knew him.

Daniel was preceded in death by his father, Harold and brother, Marshall McGee.
Read Less

Posted Jan 02, 2020 at 11:39am
I went to school in Benton Harbor with Danny. I also knew his brother Marshall. So sorry for your loss. Sending condolences.
Comment Share
Share via: 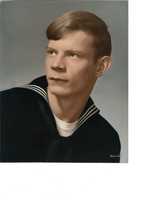