Obituary for Dana B. Sheldon 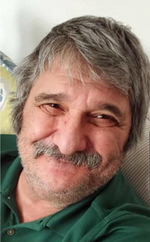 A Graveside Service will be held on Friday, November 6, 2020 at 2 PM at Ruggles Cemetery in Baroda officiated by Pastor Jack Miller. Out of respect for the family and guests in attendance masks and proper social distancing will be required. Friends wishing to leave a condolence may do so at www.starks-menchinger.com . Memorial contributions may be made to the family, c/o Judy Sheldon.

Dana was born on April 24, 1956, in Manhattan NY, to Richard & Betty (Schlegel) Sheldon. He graduated from Sacramento State University and spent a year studying overseas at the Hebrew University of Jerusalem. He had earned a Master’s Degree in History as well as a variety of other degrees. After graduating, Dana served our country proudly in United State Marine Corps. On November 26, 1987, he married the love of his life, Judi Miller, in Portage MI.

For over 30 years, Dana was well known and respected in the car dealership industry. He most recently was employed at LeValley’s and Lexus of Michiana. In 2009, he chose his most beloved occupation of all, Genealogy. His latests projects were from Italy, Spain & Portugal. He loved history and helping people find their families.