To share your memory on the wall of Dale Morse, sign in using one of the following options:

Dale enjoyed many activities and hobbies and was an avid reader of historical literature. As a teenager, Dale bought a 1938 Dodge Woodie which he later restored to its original glory. It was Dale’s pride and joy. He won numerous awards for his meticulous and beautiful restoration. Dale’s later project, a 1962 Lincoln Convertible, was purchased as a gift for his wife and was a favorite of his grandkids. Dale loved to take them for rides with the top down on a beautiful summer day. In addition to collectible antique cars, Dale was a member of the American Numismatic Association and a lifelong coin collector. Dale also took great pleasure in researching the genealogy of his and his wife’s family. Dale and Peg’s commitment to their community was foundational in the raising of their children. In addition to volunteering for school and church functions for years, Dale was a long-term member of the Lakeshore Lions Club and more recently a volunteer driver for the St. Joseph Senior Center.

Dale’s family fondly describes him as a steadfast and loving man that was thoughtful, deeply caring and with a wonderful sense of humor. Dale’s children are grateful for the values that he taught them and for the fine example he set as a kind and loving father and grandfather. Dale will be greatly missed.

Dale is survived by his daughter Susan (Brian) Kazmierzak; son Doug (Michael Abare) Morse; four grandchildren Mitchell, Mason, Brayden and Henry; five nieces and one nephew. He is preceded in death by his loving wife, Peg, his parents and sister Carol Zamarron.

Friends may visit with the family from 10:00 A.M. until 11:00 A.M., Saturday, April 24, 2021 at Starks & Menchinger Chapel and Cremation Service, 2650 Niles Rd., St. Joseph followed by a Celebration of Life Service at 11:00 A.M., with pastor David Hills officiating. A private burial will take place at Hickory Bluff Cemetery at a later date. Memorials may be made to the Lakeshore Lions Club or the Stevensville United Methodist Church where Dale and Peg were longtime members. Those wishing to share a memory of Dale online are welcome to do so at www.starks-menchinger.com.
Read Less

Receive notifications about information and event scheduling for Dale

We encourage you to share your most beloved memories of Dale here, so that the family and other loved ones can always see it. You can upload cherished photographs, or share your favorite stories, and can even comment on those shared by others.

Posted Apr 22, 2021 at 10:59pm
Mr. Dale Morse, P.E. did a great job at the Michigan Department of Transportation (MDOT). I meet Dale when I was working at the Berrien County Road Commission. At that time the MDOT provided required federal aid oversight on Federal Aid projects for the local agencies. Dale was very knowledgeable and always had a solution for problems when they happened. I missed working with Dale after he retired from MDOT. I saw him a few times around town after his retirement. Dale was a wonderful person. My deepest condolences to his family. Sincerely, Brian Berndt, P.E.
Comment Share
Share via:
ST

Posted Apr 21, 2021 at 03:58pm
Peg and Dale Morse were the first two people I met when I moved to Golden Crest in Stevensville. Their warmth and caring continued through the years. I have such special memories of them and their children. I pray for peace and comfort for their loved ones. The world is better because of them.
Comment Share
Share via: 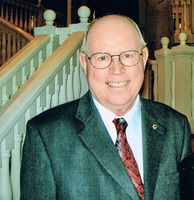