To share your memory on the wall of Charles \"Chuck\" Adams, sign in using one of the following options:

He was surrounded by his surviving sons Jeffrey and daughter in law, Trish; Christopher and daughter in law Carrie; daughter Theresa; grandchildre... Read More
Charles Wesley Adams, 87, joined his son, Howard, who predeceased him December 5th, 2020.

Charles (Chuck) Wesley Adams was born January 11, 1934 in Sturgis, Michigan to Howard and Freda Adams. Chuck graduated from Sturgis High School where he majored in track and football and enrolled at Western Michigan University. He was drafted by the US Army but because he was a member of the Naval Reserve served in the Navy instead. After discharge he married his high school sweetheart, Mary Spaniola, and finished Western with a degree in accounting.

Upon graduation, Mary and Chuck moved to S. Bend where Chuck traveled as a member of the Bendix audit staff. For the next 5 years the growing family traveled with him whenever possible in their Holiday Rambler. He was an avid hunter and fisherman and when they moved to St. Joseph and Chuck’s new job at Heathkit, bought a Lake Michigan boat to go after the coho! Dad has been the topic of many fish stories. The dreaded trolling and fishless fishing to the point that fishing has skipped a generation to grandson Nick who always caught more than Gramps.

The dream of farm living became a reality when the now family of 6 bought historic White Gate Farm in Buchanan. Farm life agreed with the “city slickers” who excelled at 4H horse events and loved winters snowmobiling with great neighbors. Raising kids, a cow, horses, and cats, he once had 26 barn cats. He had them all named and when he gave them away would make a follow up visit to see if they were thriving. During 30 years at White Gate Farm, Chuck worked as comptroller over the Heath Company’s retail stores, retiring about the time Heath closed their doors.

He rode his Gold Wing motorcycle to work from the farm to St. Joseph everyday, weather permitting and was thrilled when Mary agreed to take a trip to New England provided they antique and visit historic restorations. Following was the car trip to pick up the antiques. Chuck loved athletic events in which his children excelled, and as his grandchildren began playing high school sports, he never missed a game.

Moving to the lake, 16 years ago, into a house Howard built for them, Chuck has enjoyed grandkids, boating, the Paw Paw Lake Yacht Club, friends, dining out, and the Knights of Columbus at St. Joseph’s Church in Watervliet.

A Mass will be Celebrated at 11:00 A.M., Friday, February 26, 2021 at St. Joseph Catholic Church Watervliet, 157 Lucinda Lane, Watervliet, MI 49098 with Fr. John Ambrose officiating. Inurnment will be held at a later date at St. Joseph Catholic Cemetery in Watervliet. Memorials may be made to Sarett Nature Center, Fernwood Botanical Garden or St. Mary of the Lake Catholic Church in New Buffalo. Those wishing to share a memory of Charles online may do so at www.starks-menchinger.com
Read Less

Receive notifications about information and event scheduling for Charles "Chuck"

We encourage you to share your most beloved memories of Charles "Chuck" here, so that the family and other loved ones can always see it. You can upload cherished photographs, or share your favorite stories, and can even comment on those shared by others.

Posted Feb 26, 2021 at 09:01am
Mary and family, my deepest condolences in the loss of Chuck! I will miss riding by him in the neighborhood and poking fun with him!
Comment Share
Share via:

Posted Feb 26, 2021 at 08:54am
Heartfelt Condolences to the Adams family. While at Ferris State, Mary and I met Howard and Kelly Adams. Towards the end of our days at Ferris, I gave my resume to Howard and he passed it along to his father. Chuck was able to setup a job interview through HR and I was hired into Heath Company. I will forever be grateful to Chuck and Howard, and what they did for me and my family. God Bless and may Chuck and Howard Rest in Peace.
Comment Share
Share via:

Posted Feb 25, 2021 at 06:55pm
I feel fortunate; I remember the Holiday Rambler, the lake boat, the Gold Wing and Mr. Adams going hunting in the fields off of Cleveland Ave with the family dog, Ava. My family was very fortunate to have the Adams’ as neighbors and life long friends. With heartfelt sympathies, Eric Wolff
Comment Share
Share via:

Haha! Can you still hunt off of Cleveland?! My dad would if given the chance. Ahhh sooo fun!
EF 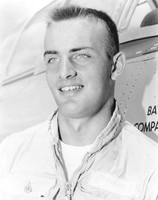 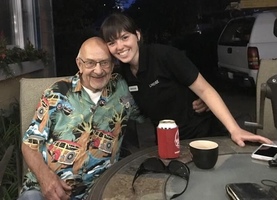 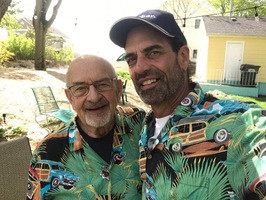 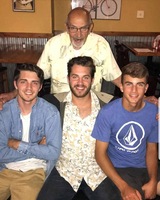