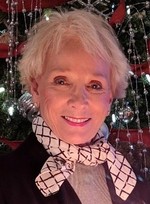 Carol Diana Vincek, 82 passed away in St. Joseph Michigan after a valiant battle with cancer. She was born in South Bend, Indiana and later moved to SW Michigan to raise her family on a small farm outside of Baroda. She later moved to Stevensville and resided there until her passing.

Carol was a devout Christian and a member of the First Church of God in St. Joseph, where she loved singing in the choir. She was also proud of her six children and was an avid golfer and gardener and loved being outdoors especially gardening at her home and walking along Lake Michigan.

She was preceded in death by her son Robin Vincek

A memorial service will be planned for later in the Spring to celebrate her life. Those wishing to share a memory of Carol online may do so at www.starks-menchinger.com