To share your memory on the wall of Betty Andrews, sign in using one of the following options:

Receive notifications about information and event scheduling for Betty

We encourage you to share your most beloved memories of Betty here, so that the family and other loved ones can always see it. You can upload cherished photographs, or share your favorite stories, and can even comment on those shared by others.

Posted May 26, 2020 at 09:52am
Paulette, Deepest sympathy to you and your family. I have many fond memories of your mom while we were growing up, she was a sweet lady. I don’t know if she mentioned to you I saw her this winter and told her who I was. We had a nice visit ,reminiscing about many, many years ago, I even mentioned “TimTam”. I have many memories of going places with you and her when we were young ; my mom babysitting You and Brett. My mom passed away on May 7. Cherish the memories you have made, you are in my thoughts and prayers. Sincerely, Marsha Zelko Demler
Comment Share
Share via: 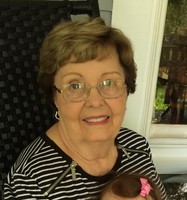