To share your memory on the wall of Barbara Huebner, sign in using one of the following options:

Barb was born on April 10, 1937, in Blytheville, AR, to Charles & Bertha (Green) Chenoweth. On July 1, 1961, Barb married the love of her life, Benjamin “Ben” Huebner, in New Lothrup, MI. The two were happily married for nearly 54 years before his passing in 2015. Barb began working at V-M Corporation and in 1980 she changed jobs and began working for Lakeshore Studios until her retirement in 1999. Barb was a devoted member of the former Church of the Nazarene where she helped teach Sunday School and Vacation Bible School. If the church doors were open Barb & Ben would be there helping where they could, not even blizzards would keep them away. However, what Barb loved more than her church was her family. She loved hosting all the family gatherings and holiday’s until it became too much for her. Every now and then Barb would take a break from tending to her well-maintained house and play games with her children and grandchildren; this always gave her great joy. She also took great pride in her beautiful flower garden. In her down time, Barb would read books that were uplifting and spiritual. Barb was an incredible lady who was always willing to lend a hand when needed. She will be missed dearly by all who knew her, especially her beautiful smile that lit up the room.

Print
A private family service will be held at a later date.

We encourage you to share your most beloved memories of Barbara here, so that the family and other loved ones can always see it. You can upload cherished photographs, or share your favorite stories, and can even comment on those shared by others.

Posted Feb 25, 2021 at 12:41am
I will always remember Barb and Ben from the Nazarene Church. Barb always had a smile, kind heart and beautiful soul.
Comment Share
Share via:

Posted Feb 23, 2021 at 09:14am
What a godly woman! Barb was one of the first people to greet my son, Phillip, and me when we visited the Church of the Nazarene. She was so loving and kind to us, often asking me about my week. Barb took a real interest in the children of our congregation and was such an encouragement to all who knew her. I am so blessed to have known Barb.
Comment Share
Share via: 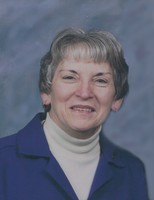