To share your memory on the wall of Arnold Weaver, sign in using one of the following options:

A Celebration of Life Service will be held on Monday, April 12, 2021 at 11a.m. in the Starks and Menchinger Chapel, ... Read More
Arnold “Arnie” Lee Weaver of St. Joseph passed away Monday, April 5, 2021 at Spectrum Health Lakeland in St. Joseph.

A Celebration of Life Service will be held on Monday, April 12, 2021 at 11a.m. in the Starks and Menchinger Chapel, 2650 Niles Rd., St Joseph, MI with Pastor James Matthews officiating. Burial will follow at Riverview Cemetery. Friends may visit with the family on Sunday, April 11, 2021 2:00 – 4:00 P.M. at the funeral home. Memorial donations may be made to the Salvation Army or American Heart Association. Those wishing to share a memory may do so online at www.starks-menchinger.com.

Arnie was born on September 8, 1945 in Tipton, Iowa, to Harold and Pearl (Brady) Weaver. He graduated from Tipton High School and continued his education at Upper Iowa University earning a Bachelor Degree in Accounting. Arnie also earned several graduate degrees in banking and commercial lending from the University of Wisconsin and the University of Oklahoma. He served in the United States Army beginning in 1969 until being honorably discharged in 1971 with a good conduct medal and a bronze star. He married Patricia VanderMeer on October 29, 1977 and they were happily married until her death in 2011. Arnie married Margaret “Margy” Oja on December 28, 2019 and had two wonderful years together until his passing.
Arnie loved banking and advanced from a teller at Tipton State Bank in 1963 to President, Vice Chairman, and Chief Operating Officer of Pinnacle Financial Services (formerly Peoples State Bank), before retiring in 1998. He continued serving the community as a member of the St. Joseph Kiwanis Club for over 40 years and served a term as President. He was also a past director of the Blossomtime Festival, director and past President of United Way, Salvation Army, City of Saint Joseph Hospital Finance Authority, Boy Scouts of America, a member of the Jaycees, and First United Methodist Church St. Joseph. Arnie was a University of Michigan and University of Iowa fan and enjoyed playing golf.

Receive notifications about information and event scheduling for Arnold

We encourage you to share your most beloved memories of Arnold here, so that the family and other loved ones can always see it. You can upload cherished photographs, or share your favorite stories, and can even comment on those shared by others.

Posted Apr 11, 2021 at 05:03pm
We are so sorry to hear of the passing of Arnie both myself Georgiana Hucko and Ginger Aydelott worked with Arnie for many years at Peoples State Bank . It is so sad for someone as good and nice to pass away so fast. Our thoughts and prayers go out to both of you . We also worked with Patty and he kept us all on our toes. And gave us a ruff time in our pick's of football teams Michigan and Notre Dame. Glad he was able to find a nice lady like Margy to make him happy after Patty passing.Again our deepest sympathy of Arnie passing

Posted Apr 08, 2021 at 05:09pm
Joni and Margy, you know how much Arnie will be missed. He was a good boss, he and Patty were most cherished friends.
We enjoyed many good times together and both are missed.
I wish you and Axel the best in the years to come.
God Bless,
Glennadean
Comment Share
Share via:
BK

Joni and Margy you are in my thoughts and prayers. He will be missed. I had the best visit with him, at Aunt Daryl's funeral, and meet Margy. I will cherish that time. I have jewelry boxes that l still use today and always remember the day he gave it to me. I know he got the biggest hug. I remember going to AZ and seeing him when he was stationed there in service. We went down and spent the day in Mexico him. Childhood memories. We also stayed with Patty and Uncle Arnie when we would go to Michigan for Glendon's football games. Those were days we will never get back but hold dear to our hearts now. You were his world Joni. I will pray for you and Axel to give you strength. Margy too. Bless you all Becky Klein and my family. 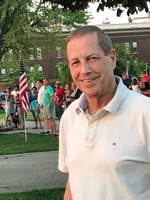