To share your memory on the wall of April Krajecki , sign in using one of the following options:

A celebration of life graveside service will be held on Friday, August 7, 2020, at 2pm, at Shanghai Memorial Cemetery. Arrangements have been entrusted t... Read More
April Ann Krajecki, 39, of Watervliet, passed away on July 28, 2020, in St. Joseph.

A celebration of life graveside service will be held on Friday, August 7, 2020, at 2pm, at Shanghai Memorial Cemetery. Arrangements have been entrusted to Starks & Menchinger Chapel & Cremation Services, St. Joseph.

April was born on October 6, 1980, to Theodore and Linda (Mitchell) Krajecki. She graduated from Watervliet High School in 1998. April always had a smile on her face and willing to give a helping hand. She had a strong heart and a fighting spirit. April’s children where the most important part of her life, spending time with them was her most treasured time.

April was preceded in death by her mother Linda Krajecki, grandmother, aunts and uncles.

April’s family would like to thank Lakeland Hospital Staff for all the help they gave April over the last couple years.
Read Less

Receive notifications about information and event scheduling for April

We encourage you to share your most beloved memories of April here, so that the family and other loved ones can always see it. You can upload cherished photographs, or share your favorite stories, and can even comment on those shared by others.

Plant a Tree in Memory of April
Plant a tree 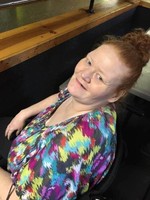