To share your memory on the wall of Annegret Williams, sign in using one of the following options:

In 1949, as communists took over her homeland in the northern province of Mecklenburg, Anne and her family survived a harrowing escape in the middle of the night to West Germany. A few years later her family was able to board the Noordam Holland passenger ship in Rotterdam for a ten-day trip to New York where they then took a train to meet relatives waiting for them in Niles, Michigan.

Thanks to her parent’s hard work and perseverance, they were all able to become official U.S. Citizens in 1958. After graduating from Benton Harbor High School in 1961 as a member of the National Honor Society, Anne turned down a full scholarship to attend Lake Michigan College to work as a Whirlpool secretary for Steve Upton.

Anne married her high school sweetheart, Dave Williams, in 1963 and together they raised three rowdy boys who all attended Lakeshore High School. Once her kids were old enough, Anne was able to put her knack for travel to good use and became a travel agent. She later owned FamFacts, a publication for travel agents. She travelled the globe extensively but especially loved organizing annual spa trips to Hungary and touring New Zealand and Tahiti with her husband.

In November of 1989, when the Berlin Wall opened and the people of East Germany were liberated, Anne was elated to be featured in The Herald Palladium, retelling the story of the night she was smuggled across the border at the tender age of seven.

Anne was a dedicated mother and “Oma” to her family and treasured time outdoors, enjoying the beaches and Lake Michigan. She looked forward to spring and tending to the many flowers that bloomed in her garden. She was an avid golfer and fisherman and couldn’t wait to spend the weekend at their camper on Hemlock Lake each summer. She will be remembered for her sense of adventure, her skill at poker playing, and her uncanny ability to fix just about anything.

Anne is preceded in death by her parents, her sisters Ava Hoffman and Brigitte Keissling, and her brother Fritz Schroeder.

A Celebration of Life Service will be held at 2:00 P.M., Saturday, May 1, 2021 at Starks & Menchinger Chapel, 2650 Niles Road, St. Joseph, MI. Friends may visit with the family from 12:00 P.M. until time of service at the funeral home. Memorial donations may be made to First Church of God in Anne’s name. Those wishing to send an online condolence may do so at www.starks-menchinger.com. Arrangements have been entrusted to Starks & Menchinger Chapel and Cremation Services.

Receive notifications about information and event scheduling for Annegret

We encourage you to share your most beloved memories of Annegret here, so that the family and other loved ones can always see it. You can upload cherished photographs, or share your favorite stories, and can even comment on those shared by others.

Posted May 02, 2021 at 05:24pm
Dave and I are the last two in our generation of the Williams family and Anne always seemed more like a sister than a sister-in-law to me. We had so many shared interests....love of family, flowers, and travel to new and far-away places. Anne was a tower of strength for all of us. We will miss her always and love her forever. On the road of life it is not where you go, but who you travel with. Marylea W. Giessler
Comment Share
Share via:

Posted May 02, 2021 at 01:16pm
Dear Uncle David and cousins. So sorry to hear about the passing of Aunt Ann thank goodness for the technology to attend 300 miles away she lived a great life as a wife, mother, daughter and business woman. A lot of great memories and stories shared today. Let this comfort you with all the memories you have. Love Cindy
Comment Share
Share via:
DV

Posted May 02, 2021 at 10:15am
Dear Uncle David, so sorry to hear of the passing of Aunt Anne. I will always remember her as a kind and caring person. From watching the beautiful service for her, I could feel the love in the room. One thing that what mentioned was her concern and inclusiveness that she always felt for others. Despite years between seeing you all over the years, I remember her warmth when we would see each other...always feeling welcomed. Sending prayers of comfort to you and your family during this difficult time. With love, your nephew Dan Varland
Comment Share
Share via:
NF

Posted May 01, 2021 at 11:55am
Michael,. I know your Mom was the heart of your family. I am so sorry for the sadness and loss you, Meara & Owen are feeling. I hope that soon the life lessons and warm memories she shared will provide comfort and even smiles. Wish we could be there in person to hug you and share in your grief. Please extend our thoughts and prayers to your Dad and brothers as well. Noelle & Michael
Comment Share
Share via:
AS

Posted May 01, 2021 at 11:20am
Dear Michael, Meara, and Owen: We were sad to hear of Michael’s mom’s passing and are thinking of you as we send to all of you our heartfelt condolences. An inspiring life story! The Spencers (Andy, Katie. Will, and Pete).
Comment Share
Share via: 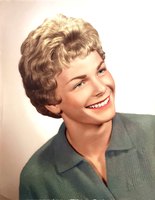