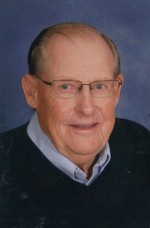 A private graveside service will be held on Wednesday, April 22, 2020 at Riverview Cemetery, St. Joseph. Memorial contributions may be given to the Christian Reformed Church Scholarship Fund. Those wishing to leave a condolence for Al’s family may do so at www.starks-menchinger.com.

Al was born January 9, 1935 in Chicago to Albert and Margaret (Sieber) Schoenbach. He was a graduate of York Community High School, class of 1954. He went on to graduate from Northern Illinois University in 1959. In 1969, Al moved to Michigan, employed as a teacher, but soon after having his family, he owned and operated Twin Cities Asphalt Paving Company until his retirement in 1997. In 2013, he married Alice (Parker) Meyer and they’ve spent the last seven years together. Al was a very active member of the Christian Reformed Church since 2010. He played a key role in obtaining the famous St. Joseph Carousel as a founding member of the Carousel Society. Those who knew Al will miss him for his warm personality and generosity. He was a natural people person, which shone through with his involvement in Cadets and the church scholarship program.

He is preceded in death by his wife, Dagne; his daughter, Julie Kasmer; two sisters; and his parents.