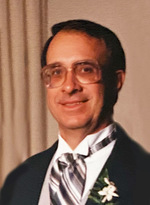 Alan Hamilton McKee, Sr, age 84, passed over peacefully surrounded by his family on October 26, 2020. Alan was born and raised in Muskegon, MI, and attended North Muskegon High School. He was a proud graduate of the University of Wisconsin, where he ran track. He married Patricia “Pat” Rasey in 1958. After college, he began his career at State Farm Insurance. He retired from State Farm after 38 years in Claims Management in 1998.

In 1967, Alan and his wife, Pat, moved to St. Joseph, MI, where they raised their three children. A job transfer took them to Grand Rapids, MI, for five years; they returned to St. Joseph in 1998. In addition to his career at State Farm, Alan was very active in his church, St. Paul’s Episcopal Church, and in his community as a member of Kiwanis, a baseball coach, and a St. Joe Booster.

Alan devoted his life to the happiness of his family and friends. He was keen of mind and generous of spirit. He was known for his mischievous sense of humor, his joy of life, his loyalty to his friends, and his invigorating Old Fashioneds. Alan was a dedicated and involved father and grandfather. He was an avid tennis player and played well into his 70s. Running track was a joy of his; his North Muskegon High School track record was only recently broken. He also loved music of all genres, especially music of the ‘50s, boating on the St. Joe River, and the Wisconsin Badgers.

Due to the current circumstances, Alan's visitation will be postponed until spring time. In lieu of flowers, donations can be made to St. Paul’s Episcopal Church, 914 Lane Dr., St. Joseph, MI, or Special Olympics, Attn: Web Gifts 1133 19th St. NW, 12th Floor, Washington, DC 20036-3604. Those wishing to leave an online condolence may do so at www.starks-menchinger.com.