To share your memory on the wall of Alan Beach, sign in using one of the following options:

A Mass will be Celebrated at 11:00 A.M., Thursday, January 7, 2021 at St. Bernard Catholic Church, 555 E. Delaware Ave., Benton Harbor with Fr. James Adams officiating. Friends may visit from 10:00 A.M. until 11:00 A.M., Thursday at the church. Burial will be held at Fort Custer National Cemetery in Battle Creek. Memorials may be made to St. Jude Children’s Hospital. Those wishing to share a memory of Alan online may do so at www.starks-menchinger.com

Alan was born July 1, 1942 in Cassopolis, MI to Samuel & Freda (Cloud) Beach. He graduated from Edwardsburg High School and then received his bachelor’s degree from Lakeland College. Alan served his country in the United States Air Force from 1964 until 1967. On June 7, 1975 he married Rosanna Myrick in Benton Harbor. Alan worked for Auto Specialties and Modern Plastics as an accountant. He was a member of St. John & Bernard Catholic Church and the St. Joseph Elks. Alan also was involved with Blossom Time and Boy Scouts. In his spare time, he enjoyed cooking and winters in Florida with his wife.

Receive notifications about information and event scheduling for Alan

We encourage you to share your most beloved memories of Alan here, so that the family and other loved ones can always see it. You can upload cherished photographs, or share your favorite stories, and can even comment on those shared by others.

Plant a Tree in Memory of Alan
Plant a tree 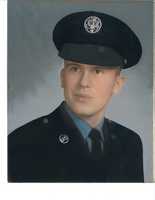